Description of the imaginary game:

Celeste and The Music Box

Celeste is a little girl, who lives happily in her cozy house, with her loving parents. She loves running around, playing with her big fluffy dog, exploring every corner of their garden. Only the sounds of her gorgeous music box could calm her down. It was almost like they put a spell on her. Once the sounds traveled across the house, no matter what Celeste was doing, she always ran to the music box and listened to it completely charmed.
Unfortunately, she couldn’t enjoy her beautiful life fully because of her health. She often was losing her consciousness. At first, it was just a few seconds. But in time her black-outs got longer and longer, until one day Celeste didn’t wake up for a day. Doctors just shook their heads - they couldn’t do anything. Then in panic and distress her mother, without realizing why, brings her daughter’s favorite music box, opens it, and puts it near her head. After some time Celeste wakes up to the joy of her loving family.
Celeste tells her parents about the disturbing world she got into when she lost her consciousness. It was cold, dark, and everywhere were lurking some horrible creatures that she couldn’t even fully describe with her 4-year’s old vocabulary. They didn’t have legs, didn’t have hands, they were nothing like humans. That place was full of horrible smells and terrifying sounds that these creatures were making. It sounded like they were in so much pain and suffering. Some of them were chasing her, and she was trying to run, but she didn’t know where. No matter where she went THEY were always there.
That was until she heard the sound of her favorite music box. She tried to run towards it, and eventually, somehow, she woke up.
For a while, the normal liveliness came back to the cozy house…
Until one day Celeste passed out again…

The music and the game mechanics:

1. At Home
2. The World of Nightmares
The main leitmotif is the music box’s track, which is present in both tracks.
It would also be used as the menu music.

Both of the tracks are aligned with the music box’s theme, so that depending on the pace of the player, at any given moment the music box could be faded in.

At home, she would walk, interact with her family, dog, toys, and she could decide to open the music box. So the “At Home” track is made to perfectly be aligned with it, it runs over the same chord progressions at the same time, and sometimes some of the instruments repeat the theme with variations. In the world of nightmares, she would try to escape from the creatures by listening to the music box’s sound and running towards it.

The “Nightmares” track is not as perfectly aligned with the main theme, as the “At Home”, but rather contrasts it. It also has the heavily modified sounds of the music box as well, but they are not recognizable. I also made the sounds of the creatures as a part of the track.
Both tracks were meant to be able to be separated into loopable sections. In “The Nightmares”, the first part of the song would be used for the “peaceful” parts, where she doesn’t encounter hostile creatures, and the second part would be used for such encounters, the tense tracks can be faded out when she is back to the safe zone. When Celeste reached the time limit, the choir part would start to play as a sign that she’s nearing her death. (choir = divine sounds :D). Since I can’t show all of these interactive functions, I just decided to make 2 complete tracks, and use the music box’s theme in both of them. In “At Home” I used it at the beginning and the end, and silenced it in the actual “At Home” part, so that we can hear how the track sounds by itself. In the “Nightmares” I included it in the end, where I modified the theme with some audio effects and slowed it down at the end. This version of the theme would be used as the "game over" music. 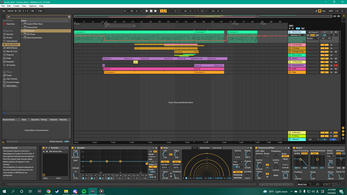 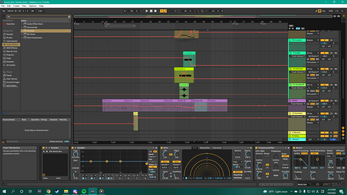 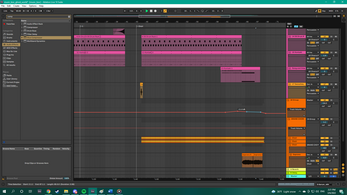 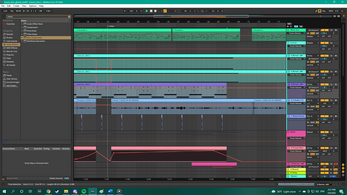 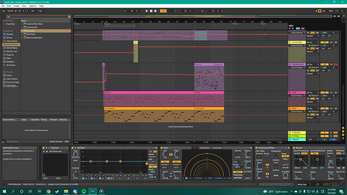